I think the current game setup favours night movements and assaults, because many difficulties involved in such operations are hard to model. e.g. troops staying in formation, in contact, not get lost, etc. The current LoS setup gives full advantage to the element of surprise in such maneuver because of detection limited to LoS parameter, without detection of vehicle noises (track, engine) and headlights when moving at night (except for carefully prepared operations or elite troops). Sometimes a defending unit cannot detect a whole tank battalion moving just 200m away. So infiltration at night is extraordinarily easy, which impacts strategic maneuvering.

For detection by sound, I suggest make a separate layer. Say, a unit has a sound detection range of a few layers(rings). And each unit has a sound value. When the aggregate sound value of a moving unit in another's sound detection ring area exceeds a threshold, a detection by sound will be triggered. Detected units will show a dot-lined icon indicating the unit type, but no firing will be triggered. Other details will follow later.

For detection by lights. I think may we can just add a layer to the moving unit, and once any any unit comes within this layer, the latter will detect the moving unit. The layer range will be determined by vehicles present.

SamuraiN said:
For detection by sound, I suggest make a separate layer. Say, a unit has a sound detection range of a few layers(rings). And each unit has a sound value. When the aggregate sound value of a moving unit in another's sound detection ring area exceeds a threshold, a detection by sound will be triggered. Detected units will show a dot-lined icon indicating the unit type, but no firing will be triggered. Other details will follow later.
Click to expand...

This is a quite striking objection/suggestion. The noise from tanks (tracks and tank engines) - especially heavy tanks - relocating or forming up near or right behind the front could be heard across quite some distance, especially with favorable winds. I am convinced that British and German sound detection systems could easily verify the location/area of such sound source. US units (other nations did this too, occasionally) used this on a tactical level, too, eg. to make the Germans believe that they were facing a full tank unit where in reality they just had a few tanks at their disposal - by letting them run circles in and around villages, or to fake that an armored attack would be imminent.

For detection by lights. I think may we can just add a layer to the moving unit, and once any any unit comes within this layer, the latter will detect the moving unit. The layer range will be determined by vehicles present.
Click to expand...

The Germans used special front and rear lights (the "Notek" lights, a "Nachtmarschgerät" = night march device or "blackout" light, produced by Notek-Technik GmbH) for night marches, on all vehicles.

The spacing light for night marches could be activated by a half-door, which either covered the normal lights or the lights for night marches (in columns). The spacing light consisted of 4 green blackout lights, with the 2 outer lights having a width of 2 cm and the inner lights having a width of 1.8 cm. The spacing between each outer light and the inner light amounted to 1.8 cm, with a somewhat bigger gap between the 2 green light pairs.
The dimensions and spacings were important, as the system made use of the way human eyes recognize distant objects/light sources:
The driver of a following vehicle could easily tell whether he kept the right distance to the vehicle in front, or not, even in total darkness:
At 35 meters and above, the 4 lights appeared as one large rectangle light. At the correct distance (25-35 meters) the 4 lights were recognized as 2 (horizontal) rectangles (due to the gap between the 2 pairs). If the driver moved up too close (less than 25 meters), all 4 lights could be spotted/distinguished.
The manual of the system explained the right spacing in columns (= "Kolonnen"): 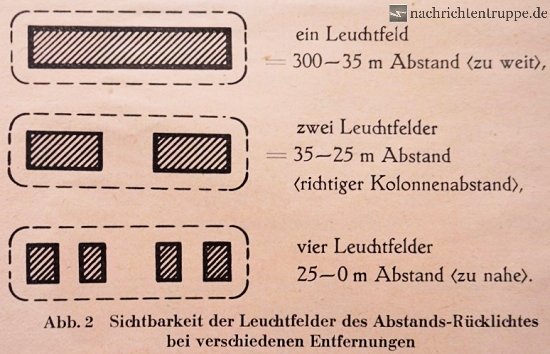 The front-light part of the system was a strange looking hood (its shape looked almost like a futuristic helmet) that contained a regular light bulb but also a special reflector that deflected the spotlight downward and (only) in front of the vehicle. The front light's luminosity could be adjusted (3 diff. levels, level 1 = not detectable above 500 meters, level 2 = not detectable above 800 meters, level 3 = " " above 1500 meters), and it could also be turned off independently (with the rear lights still being turned on).
Wehrmacht regulations from 1939 demanded to use level I (lowest luminosity) on the front lights and spacing lights to be turned on, if the enemy had visual contact with the paths/roads to be used, or during the establishment of fire bases (shunting arty pieces) at night.
The front light did not emit any light to the sides or upwards, so aerial observers (cruising at altitudes at 500 meters or above) could not detect a front light set to level 1, Allied troops on the ground could not detect the front light beyond 400 - 500 meters either, depending on terrain layout, they would usually rather hear a vehicle than see its blackout front light.
Since the actual light source (the bulb or at least the surrounding deflector) of the front system was not visible, Allied troops could not use it as aiming guide. IF they really saw the light on the road, it was a vague small light beam just in front of the vehicle that (most likely) didn't even illuminate the front tip of the vehicle and that did not illuminate the preceding vehicle (in a given column): 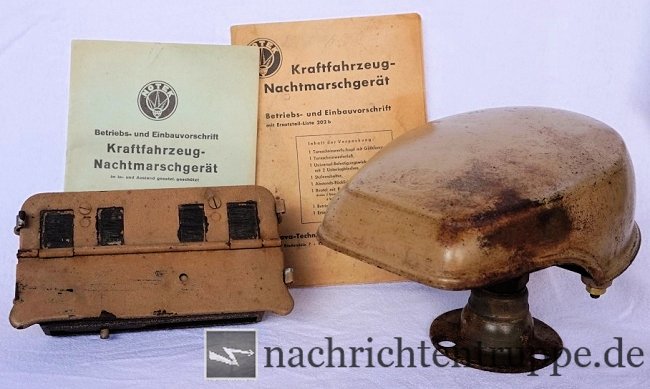 With the (very small) hole below the inner green light (on the right side), the brake light was still visible, even in blackout (green light) mode.

The spacing/brake light combo with half-flap in vertical position, the light on the right bottom (orange) is the brake light:

Some German tanks received this version of the spacing (rear) light: 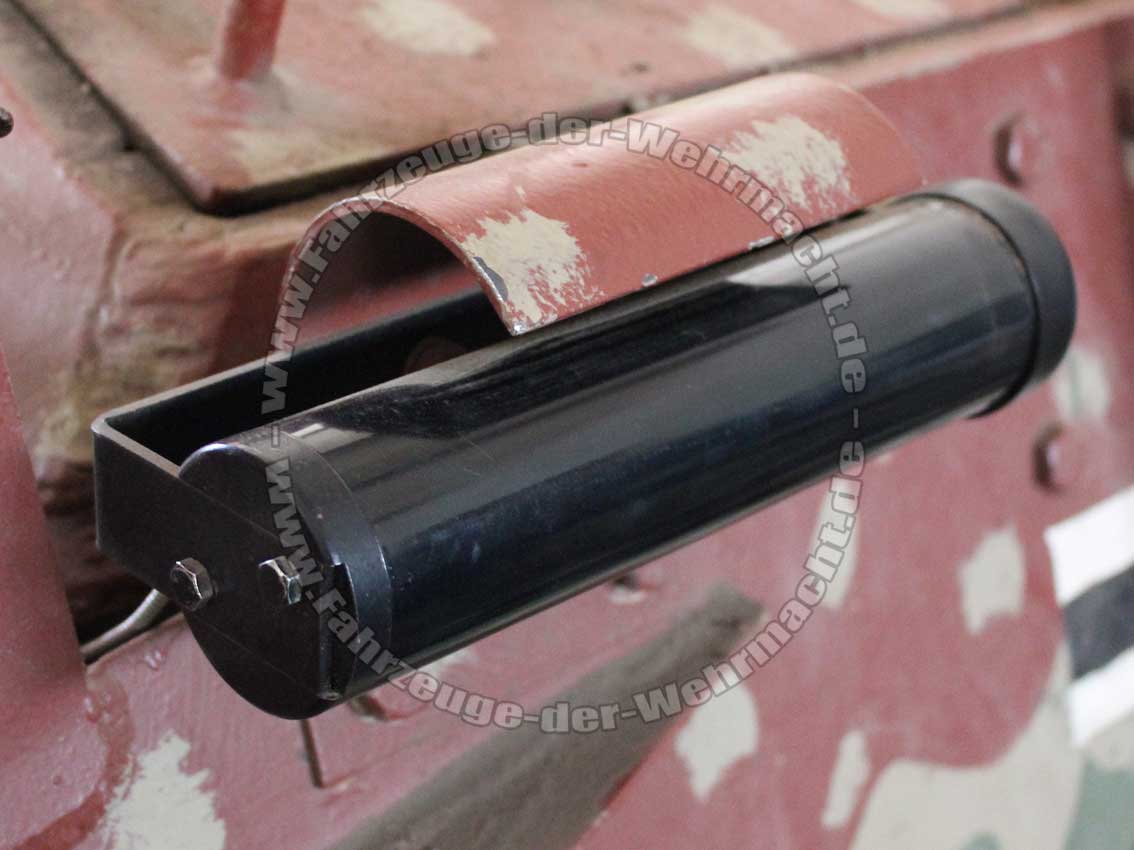 I am not sure if the Allies had such system, the Willys Jeep only received a similar system in the M38 and/or Willys M38A1 reincarnation, so somewhere between 1949 and 1952, the same goes for halftracks and tanks, afaik.

All nations used night march caps for regular front lights on their vehicles, though, similar to the one below, produced by Bosch for the Wehrmacht:

Regular front light with cap on a tank:

In order to save resources, the glass panels of the headlights on many (unarmored) cars were just painted, at later stages of the war, it seems:

Fabric covers - either used to save resources, or used as makeshift solution (the restored car is equipped with a Notek system, though): 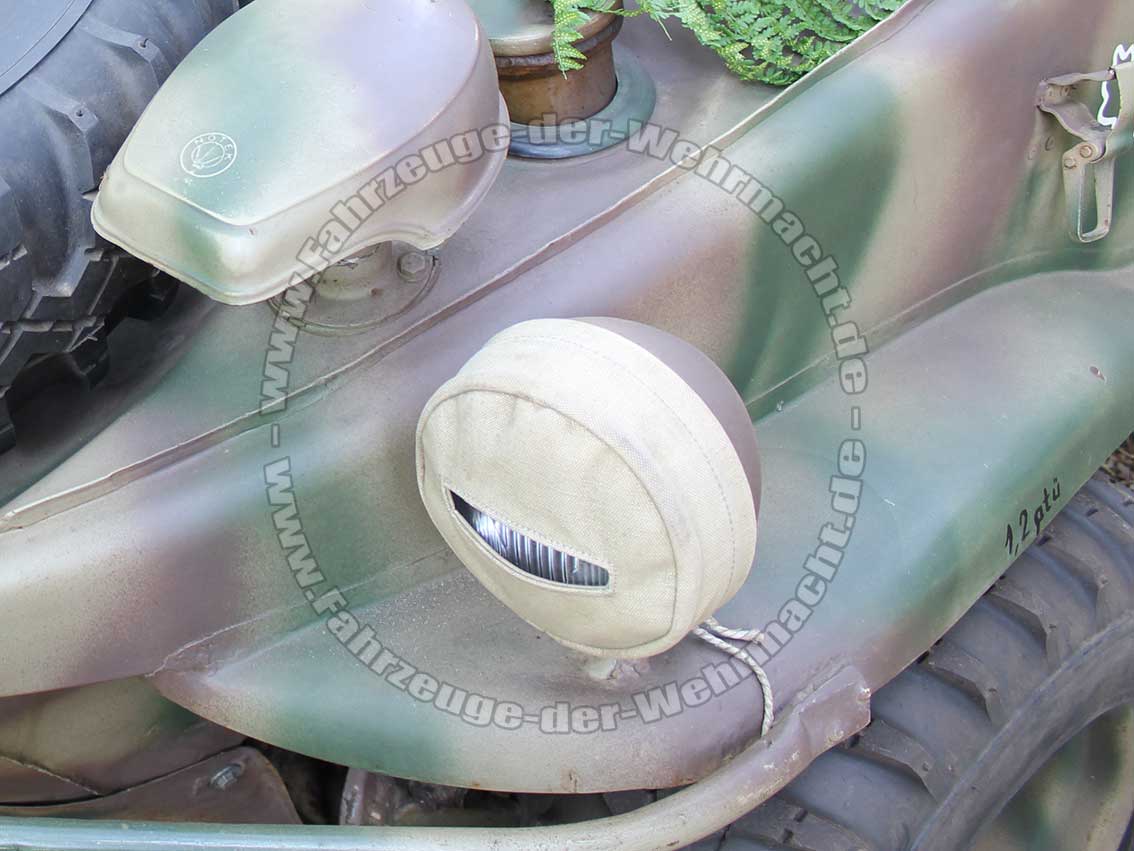 Since these caps/covers just reduced the light beam to a horizontal rectangle, which did not completely prevent the light rays to go upwards and to the side, this couldn't be considered to be a true blackout light, of course. Regular brake lights or rear lights on (some?) Allied vehicles may have received reflectors that deflected the light downwards. I've seen such rear lights on Allied tanks, I am just not sure whether they were installed widely/during the war already, or not.
Last edited: Jan 4, 2021
You must log in or register to reply here.