Welcome to the Lock ‘n Load Tactical system (LnLT). For over 20 years the LnLT system has entertained gamers with its ease of gameplay while having attention to battlefield conditions and tactics. LnLT has set a new standard in Squad-level gaming with scenario-based gameplay. Its innovative gameplay mechanics, unparalleled artwork, historical scope, and accessibility have entertained veteran and new gamers alike.

LnLT has two versions of our game manual, the largest one is titled Lock ‘n Load Tactical Core Rules Officer Edition (the version shown here), and the smaller one is titled Lock ‘n Load Tactical Core Rules Handbook Edition. Both editions have all the standard rules needed to learn and play the game. The LnLT Handbook Edition DOES NOT have the sections of the Infantry Narrative, Vehicle & Ordnance Narrative, and Print and Play edition of the LnLT Starter Kit. Both Core Rule Officer Edition and the Handbook Edition are available online to view and download for free. We do update our manuals for typos, corrections, and clarifications from time to time. Players can find their manual revision number on the back cover under the bar code.

The manual in your hands, or on your digital screen contains the latest set of guidelines and regulations for the Lock ‘n Load Tactical system. Over the years the system has grown and, with input from the community and our own experience with the system. We have concluded the need for minor changes, tweaks, rules clarifications, and subtle wording issues that need to be added and addressed.

One of the biggest changes that people will notice is the size of the manual. The Core Rules Officer Edition is 285+ pages, and the Core Rules Handbook Edition is 190+ pages. Do NOT allow the size of the manual to concern you. We have endeavored to include a lot of examples and present everything in a large font so it is easy to read. In-depth examples of play have been included to show you how the game is played with a multitude of different situations shown.

Support Weapons have been reworked with several new additions and changes to how the mechanics of SWs work. One of the major modifications that we have implemented is that every SWs with Ordnance to-hit tables can now fire from inside buildings, and we have laid out which SWs can fire from Bunkers and Caves as well. There have also been some minor changes for Weapon Teams as well. We have clarified and laid out in a more complete form how Fire Combat is conducted. We have clarified how the laying of Smoke is conducted.

Changes to the rules can be easily spotted as they have been highlighted in blue text. We encourage new players to read the two gameplay narratives (for infantry and vehicles/ordnance) found at the back of the book before reading the rules, to familiarize themselves with how a scenario plays in an intuitive and observational manner. The LnLT Core Rules Handbook Edition v5.1 can be used with any previously published module, including the LnLT Solo system. The Core Rules Offical Edition has seven additional sections adding an additional 110+ pages. The additional sections are listed below.

These Additional Manual Sections Are NOT included in the Core Rules Handbook Edition:


The LnLT Core Rules Handbook Edition can be viewed and downloaded via the Online Library including our Bootcamp Training Videos.

Please Note: There is no difference between the Printed, PDF, or Online Library Editions except those noted above. The LnLT Core Rules Handbook Edition does not include any versions of our game map, counter sheet, player-aid cards, or our Starter Kit. Our printed edition of the game map, counter sheet, and player aid cards are available within our LnLT Starter Kit product. There is a Print and Play version of our LnLT Starter Kit included with the LnLT Core Rules Officer Edition. 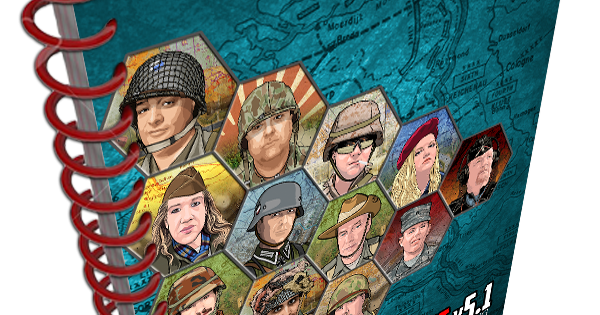 AVAILABLE IN – Printed Spiral-Bound Book, via Our Online Library and PDF Lock ‘n Load Tactical system has for over 20 years and has entertained gamers with its ease of gameplay while giving players attention to battlefield conditions and squad tactics from the 1930s to the present. The L