All American over Nijmegen AAR - Allied Side

Hey there, I'm not normally one to make AAR's. This is in fact my first one ever. Seeing all these nice reports drove me to do one myself. Posted this one in the steam forums earlier, might as well put it up here too. Anyway, here it goes...

Most of the Airborne forces will be dropped near Groesbeek. Axis reinforcements are expected from the south east and will surely push past or more likely through Groesbeek towards Nijmegen. It is of vital importance that we defend the supply base at Groesbeek. 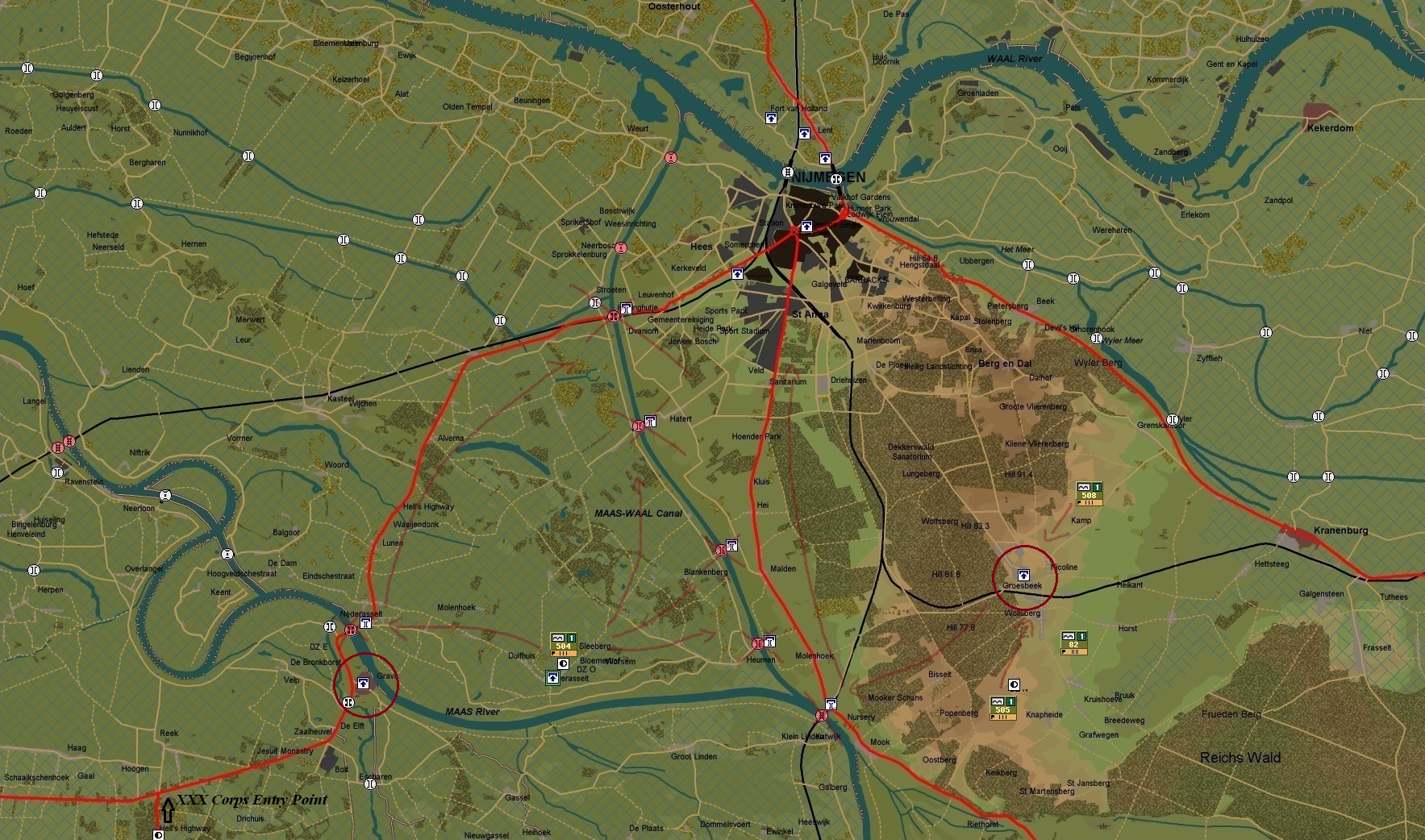 First to drop near Groesbeek are parts of the 505th and 508th. I waste no time and immediately assault the town from all sides. The defending battalion is overwhelmed and doesn't really stand a chance. Meanwhile the rest of the division drops and I let the battalions do a sweep to get some breathing room near the supply base. A definite notable was the divisional recon platoon: it was tasked with mopping up broken platoons and it performed admirably.

A recon platoon of the 82nd Airborne Division attacking a fixed gun emplacement in Heikant. While the 505th is taking Groesbeek to the west.

The 504th is dropped a couple of kilometers west of the main force and is quickly tasked to advance to Nederasselt bridge. The assault on the bridge went pretty well: 1st and 2nd battalion attacked the bridge from the east, all the while Easy company, who was dropped at the other side of the river, seized and unprimed the bridge from the west. The following push into Grave was less of succes though, as it would last well into day two until we finally set foot in the town.

Throughout the night the Groesbeek perimeter is kept busy by frequent Axis probes through the western part of the forest. At daybreak Axis reinforcements pour in from the northeren and southern highways. The 82nd watches from the edge of the forest as the enemy moves into position, just about encircling the whole division. As all hell breaks loose, 505th on the south was hit first. Then some stragglers in the woods to the north west start probing my flank again. The unforested eastern approach to Groesbeek is guarded by a mix of infantry and armoured companies. They mercifully kept their distance. Fighting continued well into the evening. By then the 505 2nd battalion managed to eliminate Korps Feldt, a divisional HQ. Nearing midnight 508 1st battalion makes a daring assault on one of the divisional suply bases. It managed to sneak past some companies at Heikant and totally destroyed the base. The men would return to Groesbeek safe and sound the next day.

Meanwhile the 504th is clearing out Grave and the Nederassalt bridge. Once the situation is under control 3rd battalion is dispatched to take the three smaler road bridges at the Maas-Waal canal. I split the unit into companies and send them out, hoping that the fighting at Groesbeek would have distracted the enemy. 1st battalion is ordered along Hell's Highway and halts just west of the heavy road bridge of Honinghutje. As evening sets in I let them rest, as they will assault the bridge early next morning. At the end of the day the first three bridges are ours. Huzza!

Fighting near Groesbeek continues. This time from the north. Mulitple flak companies swarm out of the forest and take the north part of Groesbeek. The 508th, who up unto that point didn't do that much, feels the full brunt of the push. 2nd and 3rd battalion are down to half strength, but do ultimately repel the assault due to liberal use of artillery. On the west side the 505th push towards the still heavily defended rail bridge. Progress is made but the defence is still holding.

Capturing another crucial bridge. This time 1st battalion of the 504th takes the honours.

The situation near Groesbeek remains tense. Scattered shots and shelling come from the distance. The north road is being used extensively by incoming companies. I grow impatient and want a better view of the enemy movement. I recklessly let the 82nd divisional recon platoon surge forwards. In no time it is spotted in the open fields to the east and barraged by continuous artillery fire. I can do nothing as the men are pinned down and unable to move. After hours of shelling dusk comes and mercifully the artillery fire stops. Groesbeek turns into a quiet slumber and settles in for the night.

By now the whole 504th is ordered to converge near Nijmegen to help the British push into the city. Turns out there is still some opposition on the eastern banks of the Maas-Waal Canal though, but nothing that the stalwart men of the airborne can't handle. By the end of day three the Grenadeer Guards are taking positions in the outskirts of Nijmegen and preparing for a push early next morning. My confidence is rising, maybe this will all be done before day four?

Grenadier Guards finally pushing into the outskirts of Nijmegen.

Just past midnight I order the Grenadeer Guards to make a push into the center of Nijmegen. The armoured division Coldstream will swing south and make a simulatinous push through St. Anna. The city itself turns out to be practically empty. A single artillery battalion stands in the center, but is easily dispatched. By noon the city is firmly in our grip. With more elements coming onto the map time is of the essence, we need a clear route to the north! I task the Royal Dragoons to cross the highway bridge due north and support them with all the artillery I have. For hours on end they try to get onto the bridge, but to no avail. The SS division at the other end of the bridge has all things covered and doesn't budge. The exhausted Dragoons are pulled from the line and I need to reassess my plan.

Chaos in Nijmegen as the Royal Dragoons are stopped in their tracks trying to cross the highway bridge.

Appart from some skirmishes, Groesbeek is secure and I decide to leave it in the hands of the 82nd divisional assets and the 508th. I pull the 505th to Nijmegen. By now more and more units start to emerge from the southern parts of Nijmegen. Coldstream and the 505th are tasked to deal with this as I'm reorganising my forces in the city center for another attempt to cross the Waal river.

A combined assault on a divisional HQ and some assorted companies.

During the night I let my heavy artillery pound the north bank of the Waal river. In the meantime the 504th had been resting in preparation for what was to come. Under cover of darkness the Grenadeer Guards take position at the highway bridge. Meanwhile the 504 3rd battalion crosses the railroad bridge and flanks the enemy position at the highway bridge from the west. I noticed that the railroad bridge was only lightly guarded and the enemy would probably not even be able to see what is happening during the night-time. Early morning 3rd battalion pulls off the assault flawlesly. They slip past their defences unseen and put pressure on the highway bridge defences. At that very moment the Grenadeer Guards swings into action. They rush the bridge and cross unopposed. By the time the defenders get their bearings the full might of the Guards is pouring over the bridge and they start to rout.

A joint push of the 504 3rd battalion and 2nd battalion Grenadeer Guards finally get the Allies across the Waal river.

The Welsh Guards leading the way through the orchards north of river Waal.

I managed to pull off a marginal victory. Mostly I guess because I managed to take and hold most of the defensive objectives. I narrowly missed the "destroy the enemy" objective, for which I needed to destroy half of the enemy force. If I could have cashed that one I might have ended up with something better than a mere marginal victory. It certainly wasn't due to a lack of trying.

On the other hand, and more importantly, none of the British units managed to get to the exit marker. This is the whole point of the scenario and I failed to do that. I felt my battleplan was solid until the arrival of the XXX Corps. I had anticipated that, given their might, they would just punch through Nijmegen and head north in about a day. How wrong I was. Nijmegen proved to be quite a timesink. The Corps was spinning its wheels in place while trying to cross the Nijmegen highway bridge. In hindsight I probably should have diverted the 504th way earlier to the city, in an attempt to already get cracking on that highway bridge. Also while Groesbeek and surroundings certainly saw a lot of fighting and drew a lot of German troops away from Nijmegen, I probably could have defended it with fewer forces.

Nice write up. Thanks for sharing!

Great AAR Bie.
From my experience with the game, Gavin and Browning, who advocated the importance of holding the Groesbeek Heights were spot on with their assessment.
The heights are needed to control Nijmegan and its approaches from the south and because of the defensive nature of the heights are extremely difficult to displace occupying forces lodged on them.

"Lieutenant-General Browning specified to their commander, Brigadier-General Gavin, who gave his approval, that the 82nd Airborne's priorities were, first, the large area of high ground known as the Groesbeek Heights, second, the bridge over the River Maas at Grave, then three bridges over the Maas-Waal Canal, and finally Nijmegen Bridge. Gavin was ordered not to make any attempt to proceed towards Nijmegen until the Groesbeek Heights had been secured, though before the Operation was launched he had enough confidence in his Divisional plan to allow a single battalion to proceed towards the Bridge immediately after landing." Quote taken from http://www.pegasusarchive.org/arnhem/depth_reason2.htm

This is exactly the tactics I used in my From the Meuse to the Rhine AAR. They were extremely stretched, but managed to pull of the tasks I set them.
They could have really done with another Regiment for these tasks I set them, but as so often happens in war, you have to make do with what you have available.
You must log in or register to reply here.

All American over Nijmegen - German side

Why did operation Market Garden fail?
2