Hidden Pits:
When moving using a route for the first time, roll an RN. On a 0-4 two units fall in. 5+ one unit falls in. Player's choice. Resolve a Class A encounter with the unit/s that have fallen in the pit. Once resolved, mark that route with a multi-purpose counter. It can no longer trigger hidden pits.

The Hidden Pits special sector rule is not included in 12.2.1. Special Sector Rules.

If route = tunnel, the first time I move on a tunnel (when resolving a node for the first time, I am guaranteed to fight a class A event with 1-2 units. Looking at the tile below, do these Hidden Pits sector special rule events occur only on the two interior tunnels? Or do they additionally occur on the three open tunnels that connect to other Hive tiles?

If so, this tile seems ridiculously harsh. Guaranteed to have either two or up to five Hidden Pits event on the white lines alone. Is there any text missing from the rulebook that would offer clarification?

This is my entry point sector for H003. Just making an entry would negate the scenario special rule bonus for the enemy being unaware of me. My squad is likely wiped or down to one Combat unit before leaving this sector. Not fun. 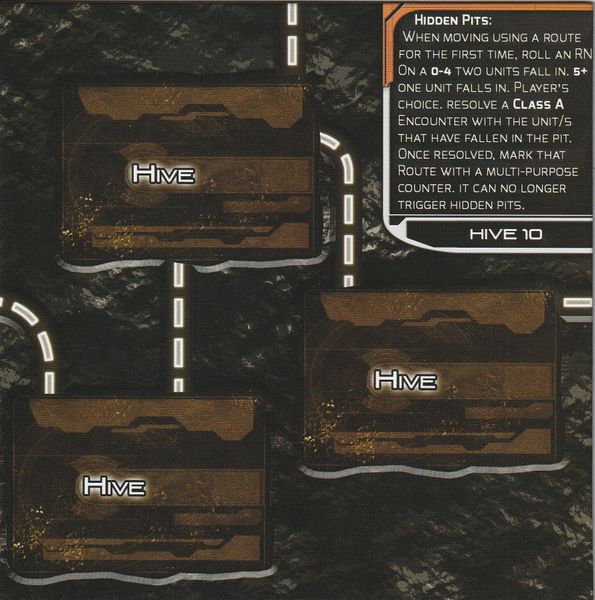 Answered by Blackwell on Boardgamegeek: https://boardgamegeek.com/thread/2378937/hive-tile-10-hidden-pits-question

The Hidden Pits only occur on the two interior tunnels, not the three exterior tunnels linking other sectors.
You must log in or register to reply here.

What's On the New WaW85 Counters